My $.02: Smithsonian Field Guide to Birds 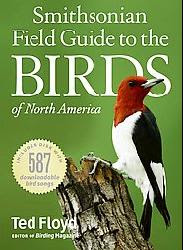 Recently I heard about the newly released Smithsonian Field Guide to the Birds of North America. After reading a couple "right on the mark" blog reviews, one over at 10,000 birds and the other at The Drinking Bird, I started looking for the book. I found it at Sam's Club for $15.74. So I bought it. You can work hard in cyber space and win a copy. Check out the details here!

Anyway, this is a guide worth checking out. To me, it does for "photo" field guides what Sibley did for "illustration" field guides. It is clearly in a class by itself, far superior to either the Audubon Society guide and the Kaufmann Focus Guide, and is equally useful for a beginner and an advanced birder. The CD of bird songs that comes with it is limited, but it's basically free. The field guide is well worth the money.
I still believe that the illlustrated Sibley Guide to Birds is the best North American guide ever. For instance, I noticed that a first year male Rose-breasted Grosbeak with its buffy plumage, which can be confused with a Black-headed Grosbeak under the right conditions, is not photographed. Sibley covers this alternate plumage well. In fact, there is little that Sibley misses and his illustrations (art, actually) cannot be matched in North America. I am, however, a fan of Lars Jonsson's art in the Birds of Europe with North Africa and the Middle East, but that's a blog entry for another day.
I expect that this is a field guide that we will see in increasing numbers in the coming year. At $15.74 for over 2000 digital photos of 750 North American birds, you can't go wrong! Add this one to your bird reference shelf.
Posted by Greg at 10:44 AM 6 comments:

Perhaps, it was only fitting on Father's Day, with both grown kids out of town, that I wandered out to the agricultural fields of Palmetto Meadows. The landscape of Palmetto Meadows reminds me of my childhood days in central Kansas more than any other place in the Ozarks. It was in this type of habitat, with hedgerows, grasslands, and farm fields, that my dad introduced me to the great outdoors. 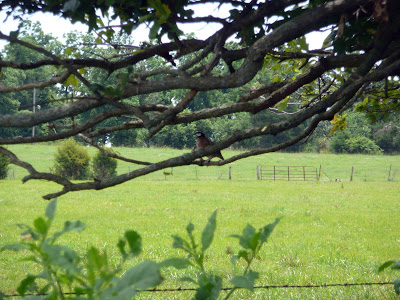 Immediately upon entering the grasslands environment, I heard the songs of the Dickcissel and Eastern Meadowlark ring out in space. Soon, the Grasshopper Sparrows were joining in. The Great Blue Heron surveyed the surrounding from his lofty perch. 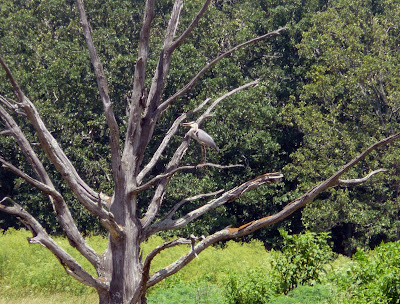 On this day, however, I was searching for a Western Kingbird. Recent reports of the species in Columbia, Missouri, begged the question. Why don't we see them down here? There is at least one record of a nesting pair near Fellow's Lake, but the species has not been relocated in our area in recent years. My last Missouri sighting was in the mid '90's..... where? ....... Palmetto..

Back to Father's Day. My dad was an upland game hunter, and the love of the outdoors that we shared surely began for me as coveys of Northern Bobwhite exploded near the noses of our English Pointer Duke and Brittany Spaniel Stubby. So, you can imagine my surprise when a pair of Bobwhite, uncommon in our area, crossed the road in front of me. 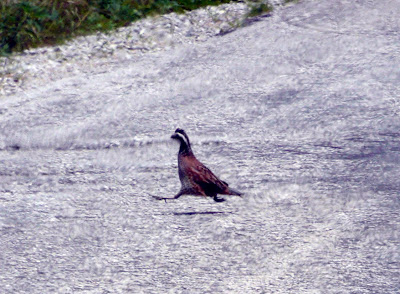 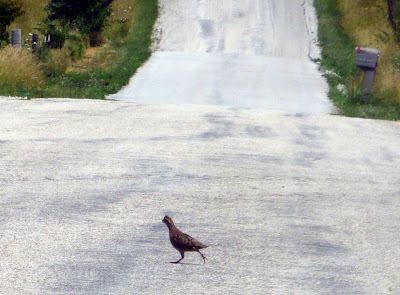 Bobwhite were once common in the Ozarks. The native grasses and agricultural fields provided excellent habitat for the birds. But then there was fescue. Although I didn't live here at the time, apparently in the 60's and 70's the non-native invader was planted everywhere because of its ability to thrive in both winter and summer in the Ozarks. This served the growing cattle ranches well. 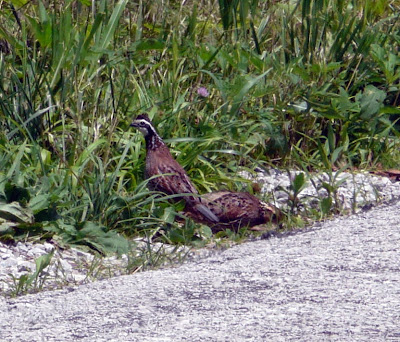 So Bobwhite are uncommon in the Ozarks these days, but you wouldn't have known that at Palmetto today. I heard 4 males singing and saw two pairs. 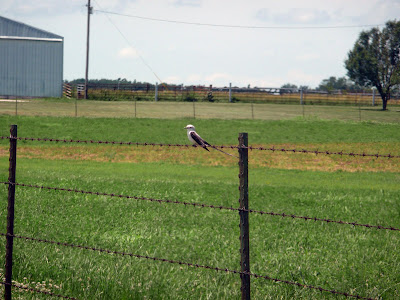 The regulars of the area, Scissor-tails and the eastern version of my sought after bird, sat on the barbed wire, wary of the slowly approaching vehicle. 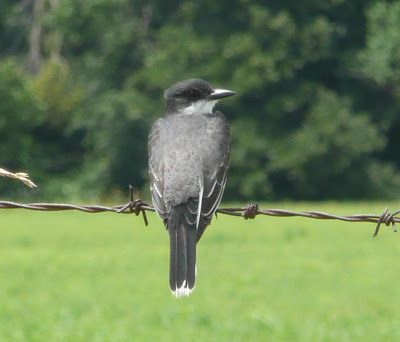 Farmers on my favorite Farm Road 166 have planted wheat this year so the area really resembles central Kansas. 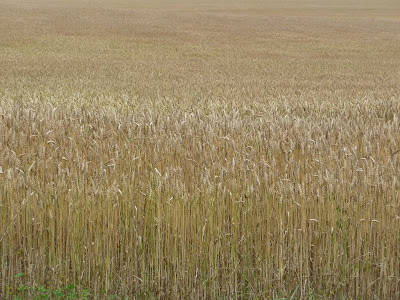 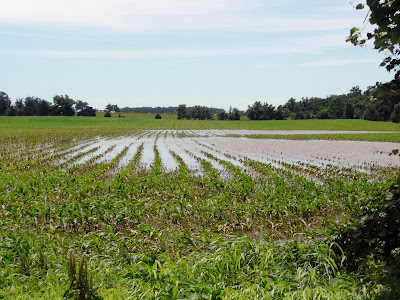 We are now 18 inches above the yearly average, and storm clouds again approach from the northwest.

And so it goes in the Ozarks. June birding is slower and more pastoral. On this balmy summer afternoon, memories of my father swirl around in my head, and Palmetto Meadows, with its robust and abundant Bobwhite, fit the bill perfectly.
Posted by Greg at 3:42 PM No comments:

Casual Rose-breasted Grosbeak in the Ozarks

This e-mail from Marvin DeJong arrived late this afternoon:

Hey Greg, should there be Rose-breasted Grosbeaks around. There was one at our feeder this afternoon. Isn't it kind of late?

I quickly replied:
Here is its picture. 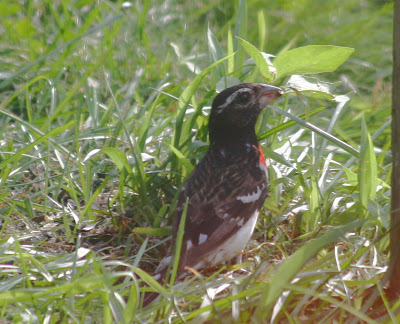 When does human activity that alters the landscape benefit avian species? Suburban housing developments provide perfect habitat for Purple Martins. Perhaps we could add House Sparrows, Brown-headed Cowbirds, Eurasian Collared Doves, Rock Pigeons, various swallows, and many others to the list. Human-constructed reservoirs provide habitat for countless waterfowl species. And, of course, we birders are partial to those species indigenous to North America. An exception would be those species from elsewhere in the world that have, on their own power, found their way to North America. Well, back to the topic....... 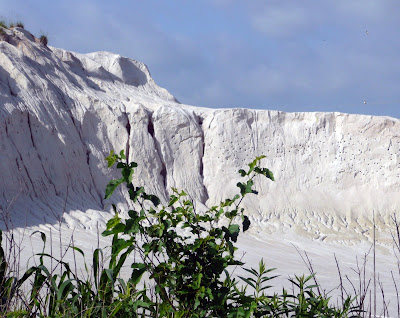 My favorite local example of an altered landscape that has become a birder's mecca is the Conco Quarry in Willard, Missouri. Species that are both rare and common in the Ozarks inhabit this barren and scrubby habitat. 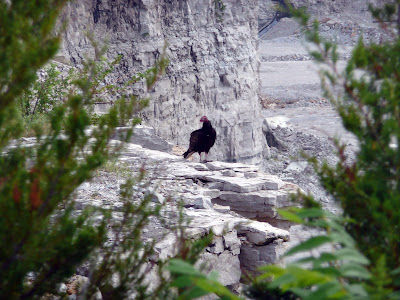 The deep and wide quarry plays with the air currents, so many Turkey Vultures take advantage of thermals to sail on the winds. Red tails, Red shoulders, and Kestrel frequently join the vultures in the skies. This vulture sets on the ledge awaiting the winds that will carry him high above the limestone cliffs. 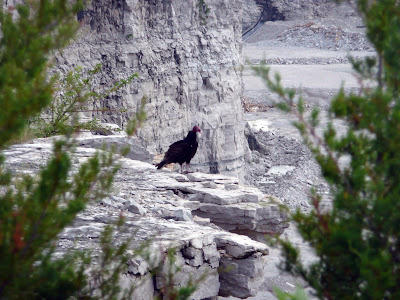 In the same environment and very uncommon in the Ozarks, Bank Swallows take advantage of huge piles of crushed limestone to carve out amazing nesting colonies on the bare ledges. 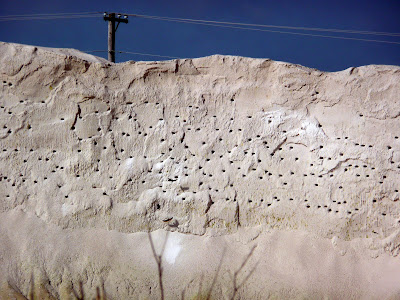 But the best of all is the population of Painted Buntings that has inhabited the quarry for at least five years. There seems to be something about the steep ledge of the quarry that attracts the species to this northern portion of its geographical range. 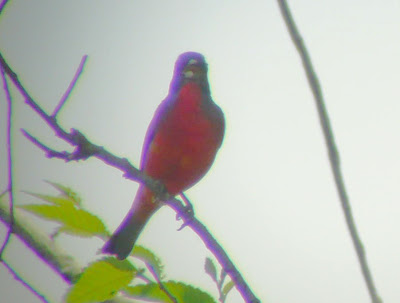 The local population is currently increasing and provides a predictable warm season site in which all Missouri birders can locate and marvel in what is arguably the most beautiful bird in North America. 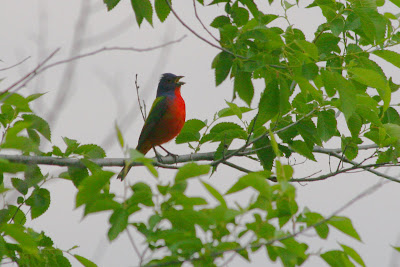 This photo by Marvin DeJong. I took the rest.
Posted by Greg at 11:27 AM No comments: