A River Runs Through Lindenlure

“ 'Oh, Eeyore, you are wet!' said Piglet, feeling him.
Eeyore shook himself, and asked somebody to explain to Piglet what happened when you had been inside a river for quite a long time.”   ~A.A. Milne.

Like Eeyore, I, and no doubt countless others through the ages, have been inside the Finley River of southwest Missouri.  As a result of this inward experience, its waters now course through my veins, and fondness for this place permeates my life and soul.  This stream's gentle currents and raging torrents have become meaningful symbols as I sojourn in both good times and bad.  My life memories are reflected as I gaze into the quiet pools that line its verdant banks. 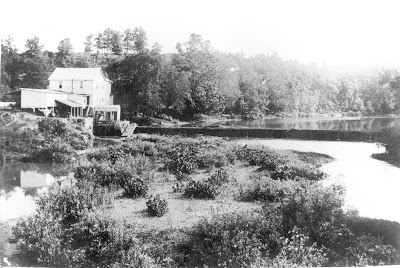 In the shallows and depths of the river as it passes through Lindenlure are the tools of earlier days, stone points, rusted bolts, and sculpted stones,  which in time have become part and parcel to the riparian flow.   The mill dam itself  attracts folks from the area, most seeking relief from a hot summer's day.  At times, they seem as much a part of the river scene as the vultures and cumulus clouds that grace the skies above.

In stark contrast are the newer "artifacts" that some leave for others to deal with;  the aluminum cans, beer tab rings, broken glass, soiled diapers, and discarded condoms that constantly compromise the natural beauty of the area.  And that brings me to the point for this writing.

Those who leave these undesirable and disgusting remnants and those who bring their irresponsible and disrespectful habits with them pose a significant threat to both the well-being of the riparian ecosystem and the many law-abiding citizens who responsibly and respectfully spend time at this uniquely scenic place.  Unfortunately, this has been the status quo for the area since the early 1980's, and probably earlier, as I know from having lived near the banks of the Finley at Linden from 1981-1997.  If anything, the situation has significantly worsened through the years.

Throughout this time, the Lindenlure Association, a group of Linden folks owning common grounds around and including the mill dam, have made a sincere effort to police the area while managing it for law abiding citizens.  At their expense, routine maintenance and security was and still is provided for the entire area on the dam side of the bridge.  Before the recent dispute, it had always been the case that law-abiding and respectful people could freely access the mill dam and surroundings.  However, the inflow of an undesirable element has threatened the safety and security of both residents of and visitors to the area.

Granted, the river itself and the road to it are publicly accessible, just as the street in front of your house is.   To get a visual, imagine that you are regularly sitting on your front porch relaxing, while people in the street in front of your home are engaging in illegal drug use, underage drinking, meth cooking, lewd and lascivious behavior, littering, all the while disturbing your peace in a variety of ways.   Then imagine that no one is there to disperse or police the crowd on your street.  Now,  throw in some rowdies that hear about the party.  They are driving while under the influence or, perhaps, with a felony warrant out for their arrest.  Hopefully, you get the picture.   Now for a fact.... according to a sheriff's deputy, 80% of all arrests at Linden are a result of people coming in from outside of Christian County.   It is hardly a local problem anymore.

Equally granted, whoever painted the rocks purple was itching for a fight.   He did purchase the property adjacent to the access, knowing that the public had both history and the law on its side when people spent time at the river there.  (By the way, the large stones across the river were placed there by the HOA in the early 1980's to prevent all-terrain trucks from driving recklessly near the mill dam and endangering the people visiting the site.)  But in order to move the discussion further, let's just refer to this perturbed purple painter as "uneducated" and "severely lacking" in people skills and common sense.

Both last Sunday and yesterday, I visited the river, swam in its waters, and let the gentle winds drift my air mattress and me into a peaceful place.  I was encouraged by what I saw.   The riverside was largely litter free.  The river was being accessed by families with joyous kids splashing and running about.   On Sunday, five officers from the Sheriff's Department were present to ensure the safety and well-being of all.  (one of the officers was on the Lindenlure Association payroll).  On Wednesday, the place was totally serene and calm, with the joyful and cooperative children exploring and taking turns jumping into the water. 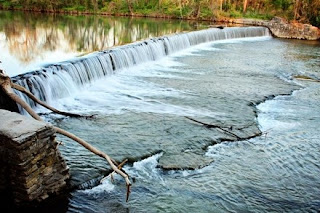 That is exactly the solution that we all have been pursuing.  The laws that protect the rivers and the people visiting there are already on the books.  Enforcement of laws regarding outstanding warrants, illegal drug use, underage drinking, littering, lewd behavior, disturbing the peace, etc., is a simple and proven method to ensure the safety of any area, rural or urban.  Let face the facts.   The sustainable, long term interests of the Finley River should govern the actions of all concerned now.  That being said, there are people within the ranks of the Free Linden group, the Lindenlure Association,  the Sheriff's Department, and the many law-abiding, responsible citizens of Christian County who recognize that our best practices for stewardship of Lindenlure are ones one that preserve the Finley River environment, prioritize community safety, and protect the character and integrity of the entire Lindenlure community.

It is a blessing and a curse that Linden is such a popular destination in Christian County.  Its beauty is the lure that we must protect and preserve.  Let's work together to be certain that the area doesn't continue to attract the wrong element because of our complacency in regard to totally unacceptable and unlawful behaviors.  The intolerance of such behaviors within the community and the quick responsiveness of the Sheriff's Department and other law enforcement groups can slowly but surely make certain that the beauty and integrity of the Finley River Valley is left intact for ourselves, our children, our grandchildren, and all the animal and plant residents of this special place.   The river community, of which we all belong, deserves no less than our best in this regard.
Posted by Greg at 2:28 PM No comments: