The Bottoms are the Tops 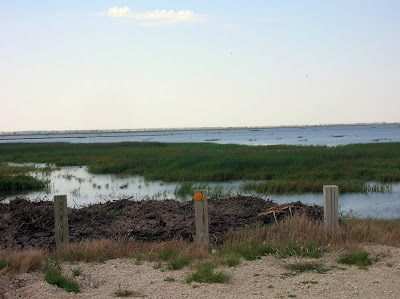 Recently I returned to my home town of McPherson, Kansas, only 60 miles east of a fantastic wetlands ecosystem. Cheyenne Bottoms, located in the heart of the mid-grass prairie, is perhaps the premiere birding locale in the Sunflower State. Although rival birding locale Quivira National Wildlife Refuge is only 20 miles to the south, Cheyenne Bottoms, with its fresh water basin, continues to attract a multitude of avian guests throughout the migratory season. 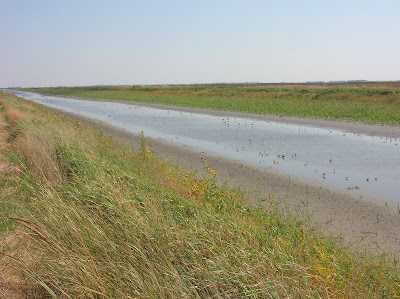 I remember as a child hearing the Cheyenne Bottoms waterfowl reports on the news just prior to the duck hunting seasons. I know that I was young (and things were bigger then!), but I still remember numbers being reported in the tens and hundreds of thousands for a variety of waterfowl species. The highly endangered Whooping Cranes stopped by occasionally, and still do in larger numbers, thanks to a well known conservation success story. 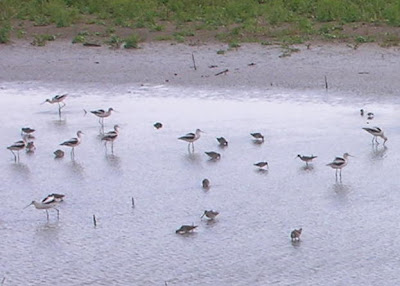 My return this time was in late September, long before the arrival of ginormus flocks of waterfowl. Blue-winged Teal and American White Pelicans numbered in the mere hundreds on this day, but shorebirds in the thousands gathered in drainage ditches built to manage the wetlands. 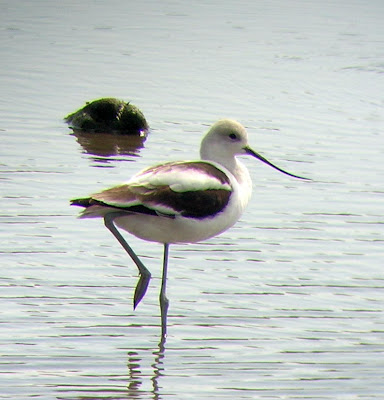 My first stop resulted in a number of beautiful American Avocets strung out across the mudflats gracefully sweeping their upturned bills across the water's surface. 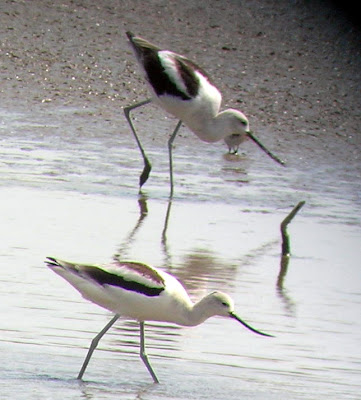 Hundreds of peeps surrounded them, including Least, Semipalmated, Pectoral, Stilt, and a few Western Sandpipers. Dowitchers probed the mud shallows. 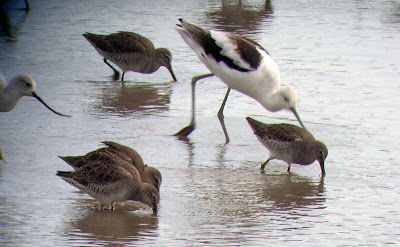 Waders included Little Blue Heron, White faced Ibis, Great Blue Herons, and Great Egret. Here is a photo of an unlucky frog in the beak of a Great Egret. 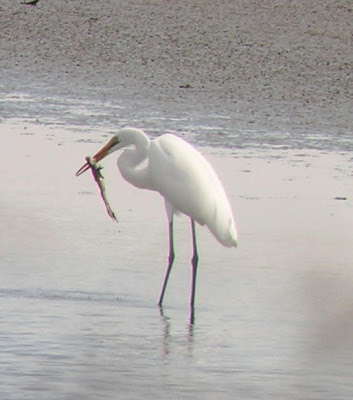 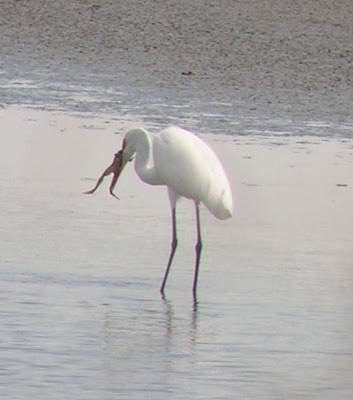 It was soon after that my life Red-necked Phalaropes arrived. Whipping wildly around the masses, literally working circles around their fellow shorebirds, these beauties were a true bird highlights for the day. 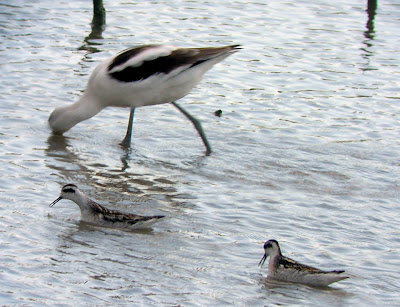 Working my way to the open water of the bottoms, I watched several flocks of Yellow-headed 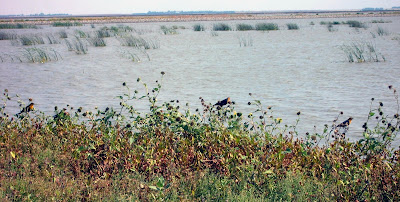 Blackbirds swooping in and out of the reeds, alighting on the resident sunflowers lining the levees. Franklin's gulls were abundant overhead.

Black-bellied Plovers and a single Sanderling joined the gulls and pelicans on a distant mudflat. 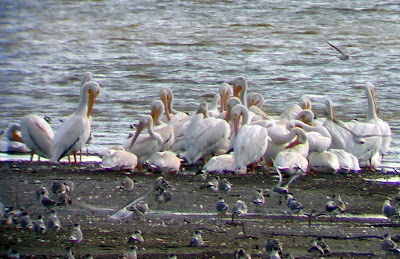 Across the levee, hundreds of Double crested Cormorants temporarily inhabited islands in the vast lakes formed by the natural basin.

Soon, I headed north of the waters to search the prairie. Three Ring-necked Pheasants, a rooster and two hens, alit in a tree for a brief moment, just long enough for me to get my binoculars up to my eyes for a quick rear end view.

I slowly creeped up the road in search of Prairie Dogs. And soon, there they were just 1/2 miles north of the bottoms! 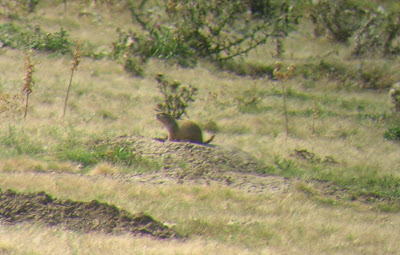 Scattering into their holes upon my arrival, it was only seconds after I got out to look that they began emerging from their burrows. A small mudhole attracted White-faced Ibis and Common Snipe to the area.
And then the prize appeared! A Burrowing Owl walked out into the open and quickly disappeared behind a prairie forb. For another fifteen minutes I waited patiently, hoping to get a photo of the bird. But it was not this bird that I eventually photographed. It was a second owl emerging into the clearing in a different location on the other side of Prairie Dog Town. 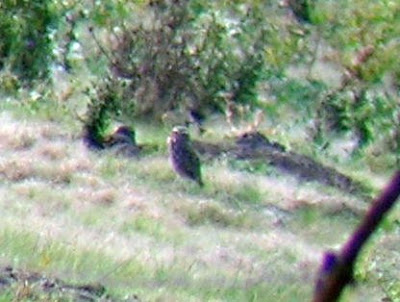 I was pleased as I leisurely made my way out of the refuge, but the best was yet to come. It had nothing to do with birds. 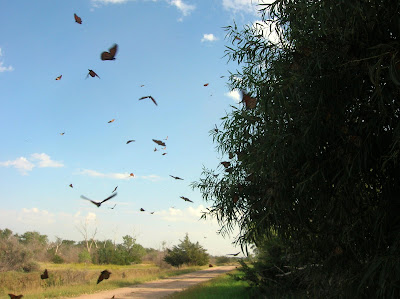 Willows and cedars lined a drainage ditch on the exit road, and it was there that hundreds of Monarchs gathered to spend the night on their long trek south to Mexico. 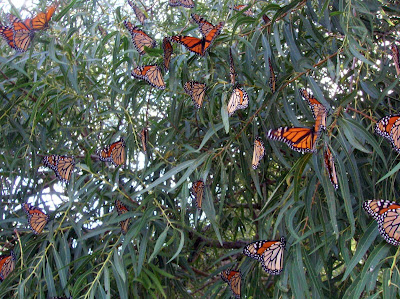 It was truly an incredible sight! 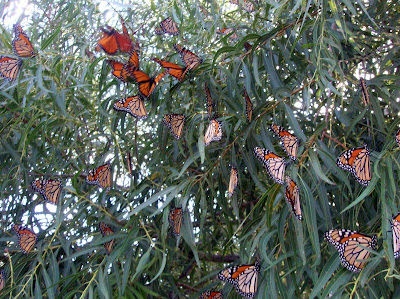 And so, my birding afternoon came to an end. A couple of nights ago, I listened to Richard Louv, author of Last Child in the Woods, as he waxed philosophic about the Nature that was so much a part of each of our childhoods. On this day, I returned to see that place unspoiled, and perhaps appearing larger than ever before, contrary to popular beliefs about childhood memories. Soon, I will return virtually...., to the Cheyenne Bottoms website and the Ks-Birds listserv. Why? To see if the coming waterfowl numbers are as great as I remember them being when I was a kid. Maybe, just maybe, they will be even greater!
Posted by Greg at 2:46 PM 6 comments: