A picture says a thousand words and so it goes with today's blog entry.  A year ago, the Greater Ozarks Audubon Society was notified by the Dickerson Park Zoo that an eaglet from the nesting pair of Bald Eagles at Fellows Lake in Greene County, Missouri, had been brought into the raptor rehabilitation quarters at the zoo.  The fledgling was grossly entangled in monofilament fishing line. It was not long before the eaglet died, another victim of a completely preventable environmental hazard.  After our initial shock, we asked for photos, knowing that this tragedy could be used as an educational tool aimed at avoiding future calamities.  Apparently, no one took pictures.
There are no bad guys in this southwest Missouri scenario.  I do not believe any Ozarks fisherman deliberately acted in a way that resulted in the death of our national symbol; or for that matter, any desirable, threatened, or endangered bird species.  (Of course, if the fisherman is an ORV enthusiast on the Outer Banks of North Carolina, it's another story entirely).
A year passed after the initial eaglet incident.  Regrettably, no action was taken or plan implemented to avoid future monofilament mishaps.  Springfield Parks Department continued to implement its applaudable efforts to make the area's waterways more accessible to the general public.   As a result, more people are fishing at Fellow's Lake, Lake Springfield, and Valley Water Mill.  As a result of more anglers, more wildlife has perished due to discarded monofilament line. 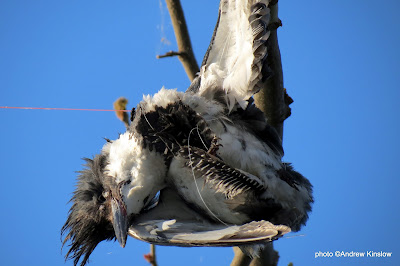 On Saturday, May 5, while Big Day birding at Lake Springfield with youth from GLADE and Logan-Rogersville High School, we came upon this dead Belted Kingfisher. This is a bird that we had seen many times, bringing abundant life to its lakeside home, incessantly rattling while flying to its dead wood snag.   It beautifully graced the landscape as it dove from its perch to catch abundant shad in the lake.   Today, a month later, it hangs lifeless, decaying in the summer sun.  It hangs there as a poignant reminder that even when our intentions are good, our impact on nature can be tragic and unforgiving.
On Sunday, May 20, while on a GOAS-sponsored field trip to Valley Water Mill, we came upon this American Robin entangled in monofilament line. 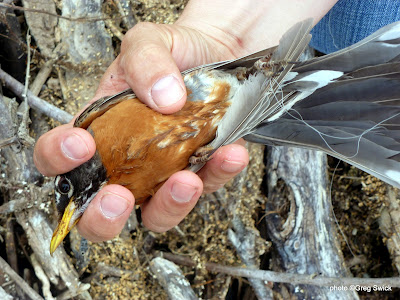 This bird was lucky, as licensed bird bander Andrew Kinslow, skilled at removing birds from nets, painstakingly freed the robin, which flew to safety with a possibly broken leg dangling.  Ironically, the monofilament line recycling bin had been removed from its Valley Water Mill site because Carolina Wrens trying to gather the line for nesting material became entangled and killed in the process.
Let's use these tragedies to educate the public and change behaviors.  Please take the time to pick up discarded monofilament line wherever you see it, whether you are an angler or not.  For more information,  visit the Monofilament Recovery and Recycling Project website .
Posted by Greg at 10:35 AM

Great post about an often overlooked environmental issue. As an educated fisherman, I do my part and often clean up after others who are irresponsible anglers.

Thanks, Jay, for coming by and leaving your thoughtful comment. It's often the few thoughtless abusers that make it more difficult for all of us who truly care for, enjoy, and respect all of nature. I wish there was a way to effectively get through to them.

You shouldn't worry about fishing line killing animals....worry more about all the animals Audubon/DOW/SELC are killing in the name of the piping plovers on Cape Hatteras National Seashore Recrational Area. That's more of a tragedy in itself. Trying to create habitat for a bird not native to the area and messing with the eco-system of nature is the tragedy.

Jody, give it a rest. The only thing tragic here is your tortured logic.

@Anonymous, all I know is that I'm interested in increased biodiversity for all wild creatures, in Missouri, as well as the rest of America. Not sure why you're posting on a sw Missouri blog, but Cape Hatteras is a national treasure and a beautiful part of America. Although I don't live there or know of what you speak about Audubon/DOW/SELC, I suspect that the wildlife populations, including the fish that I assume you care about, will respond well to reasonable laws that restrict access to a comparatively low ratio, albeit critical, of the total beach habitat. After all, it is critical habitat for fish, turtles,and other wildlife, as well as shore birds. Good conservation practices for birds also benefits fish. Restricted ORV access to the beaches will not only increase biodiversity, but will draw tourist money from many people like me. All you have to do is put out the welcome sign and speak respectfully about the precious place that you apparently are defending. ?. Or is there another agenda that I'm missing? The statistics on tourism say that it has increased since the implementation of ORV regulation in Cape Hatteras critical habitat areas. Business owners should get up to date to welcome wildlife enthusiasts and simply rake in the cash! Money is money, isn't it? Let me know when the anomosity ceases out there, and I'll be glad to drop a couple thousand into the local economy in order to celebrate this wonderful land/water treasure!